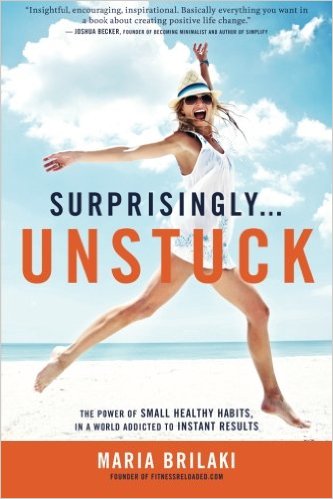 I’ve got to give two thumbs up to Surprisingly Unstuck by Maria Brilaki. This book is all about why you aren’t reaching your goals- and how to change that.  It’s chock full of tidbits that you can use to set up healthy habits that move you in the direction of your goals. You might be thinking, “Yeah, I’ve heard all of that before.” Well, I just bet you haven’t.

While I could give you all kinds of examples of how this book sets you up for successful habits, I would sum it all up like this: It’s all about making your habits pleasurable- enjoyable, fun and simple.

Ok, so I am going to give you an example. Let’s say you want to start exercising but you struggle with making it a habit.  You start an exercise program for a while… and then you fizzle out. It just gets too overwhelming, takes too much time, etc.  See? You are already stressed out and you haven’t even started 🙂 Instead of stressing that you have to commit “x” amount of time (like thirty minutes, or an hour), start with something SUPER SIMPLE. I’m talking so simple, it will sound ridiculous.  Really. If you are struggling with making exercise a habit, start with this: March for 30 seconds in front of the television each night. Yep, that’s it. Sounds ridiculously easy, right? Well, I don’t want to give away too much, but IT WORKS!  (And if you think it just sounds too ridiculous to be true, well.. just read the book! Maria explains all the psychology of why it works in a way that I can’t in this short post.)
This book was really all about the psychology of goal setting and habit formation. (But not in a science-y, boring kind of way.) We tend to set lofty goals for ourselves that are doomed to failure, because it just takes so darn much effort to form that new habit of exercising, eating right, saving money, etc.  Maria breaks habit formation down so that it’s easy-peasy and you are practically guaranteed success! And that will inspire you to keep going, moving you toward your goals rather than feeling shame and blame for not doing what you think you are “supposed” to be doing.

Wow, this book really spoke to me. I’m sooo guilty of trying to set lofty, over-achiever goals that only inspire shame and dread at making impossible changes doomed to failure before I even begin.

Want to know Maria’s tip that I’m putting into practice right now? Celebrate every little step in the direction of your goals. If your goal is to eat more veggies- Give yourself a pat on the back for remembering to buy the veggies, for taking them home and prepping them for later. Forgot to eat the veggies, but remembered later that you meant to have those veggies for lunch? Don’t beat yourself up! Give yourself a high five that you remembered- it’s actually a step in the right direction. Doesn’t that sound so much better than launching into a mental diatribe about how awful you are forgetting to eat those veggies? I think so.  Every time I remember to do some small thing in the direction of improving my health and well being- I take a moment to do a mental happy dance and congratulate myself for moving in the right direction.

I think this book is worth every penny and I have no doubt you will find many ways you move yourself towards those so important goals you’ve set for yourself this year! Make reading Surprisingly Unstuck a goal for this month and I know you won’t regret it! You got this!